Born on January 18, 1996 in Bucharest, Romania, I am a software application developer, web designer and creative director within the company SenDesign, which I founded. I facilitate the digital development of companies that want to expand in the online environment. From branding and the first step in the market, through the website, to reputation management and digital development through innovation offered to the customer.

I am a promoter of marketing based on values other than ads bombardment, juggling numbers and creating a false need. I mean, different than it is now. I encourage the uniqueness and promotion methods that benefit the customer just by simply exposing them to advertising. I support a free education effort by publishing articles for the uninitiated entrepreneurial public, on the SenDesign blog, and on the SenDesign Community Facebook group. In 2020 I published the book The Online Business Guide, in 2021 I published Successful Web Design and in 2022 I published WordPress Design for Beginners.

Between 2008 and 2010 I was part of the band Menestreli and Minnesingeri where I participated in the Sulina festival (2009), in exchanges of experience in Switzerland and other festivals. The band slowly fell apart, and my interest waned as I started high school.

I had a passion for computers from a very young age, which was hidden behind a passion for video games and fiction. At the age of 12 I created my first website as a personal study. Because I thought it was “cool” to have a website of your own. To exist in an area of ​​the internet. The purpose of existence was centered around gaming. We are experimenting with free construction systems such as uCoz and Wix that still exist today. Hence the reluctance to recommend them as valid systems. Since I did not have a clear purpose for the website, the gaming being only illusory (which I can admit in retrospect) I did not complete any website, but I started a lot from the pleasure of building them.

At the age of 15, I managed my first website, at which point I started my career as a Web Designer. It was the website of a company where my mother worked, Derma Gen Cosmetic. Text and image changes were needed on a Joomla website. I took the project without knowing anything and the time-frame was short. I hadn’t worked on this platform before and I didn’t know where to start. After 3 days I managed to upload the materials and I discovered how to handle Joomla so that I can do my job. Since then, “I Don’t Know” and “No Idea” have become leitmotifs in the career I had just begun.

From play, a career

In 2013 I started my activity as a professional web designer following an experiment. I wanted to start a gaming blog, where I could write game reviews. It was called The Gamers Concept. I started it on WordPress.com. A friend of mine at the time, hearing of my initiative, offered to get me a server and a domain so I could expand without restrictions. WordPress.com is a blogging tool hosted on a private server. I couldn’t migrate their website to my personal server, so I rebuilt the entire blog, also in WordPress technology.

That’s how I learned how to build a website, how to customize a theme, how to use WordPress, how to write an article and a lot of features of the platform. I had already written a lot and invested time in this blog. The moment I was without him. The friend who provided me with the resources was not their owner, but another friend of his. This friend of my friend had gotten mad at me for a comment complaining about the loading speed. The moment he cut off my server access. I lost everything and I didn’t know how to recover anything. The domain is now worth over $ 1,000. I started another website, The Gamers Saints, but I couldn’t recreate all the lost content.

Based on these experiences, I started to take Web Design projects from the position of freelancer. I advertised myself orally and through the former Mercador, the current OLX. In parallel (2013-2018), during the break between projects, I started to create collections of pirated games, packaged in a colorful menu with music, images and all the cutlery, which I distributed on torrent websites. I will not go into detail here, but I will dedicate a blog article. By the end we launched 8 distinct collections each with at least 2 series of improvements. I had rare games that didn’t get out of the absurd corners of the internet anywhere. They were old games that no longer ran on modern systems, which I modified to work. Either by following tutorials on the internet but mostly through intuition and exploration. I promoted them on The Gamers Saints website, which was on hiatus due to lost content. By creating these packages I learned how to create Windows programs, how to use Photoshop and how to deliver a product, which increased my portfolio and I started my activity on Fiverr where I was very successful.

In parallel with some of the above, I started repairing computers for which I had a passion. When I was little I had the stupid habit (good in retrospect) of exploring every file in Windows and completely customizing it. I installed all kinds of programs and deleted a lot of system files. That’s how I ruined it and I had to fix it … secretly to mask the problem. The antivirus back then was rainwater, so I learned a lot about Windows and how it works, how it breaks down and how to fix it. When I started building my own desktop systems, I encountered a lot of hardware problems that I had to study and fix. Because I knew all this, I decided that I could do it for a fee, so to practice on a third level.

It all started with play, curiosity and great boredom.

Labeled as a failure in IT

The beginning of my career took place during high school. In the 9th grade (2011 – 2012) I entered mathematics and computer science in a well-rated high school but poor in reality, where I was described as unfit for the informatic profile and with strong recommendations to be moved. The computer science teacher decided that I was not on my way and failed me, in the second semester, although the level at which he taught the subject was execrable. In the same year I took the ECDL Core courses and passed all (7 at that time) exams with a score over 90%. I was the youngest in the exam room.

I changed high school in the 10th grade, keeping the math-computer science profile. Not having the Informatics knowledge from the 9th grade, I failed again, in the first semester this time. I took private courses and from the 11th grade I had an average of 10. I enrolled in all the courses I had available in high school and I accumulated many diplomas including: ECDL Web Editing, Cisco Networking Academy IT Essentials, English Database Design and Programming with SQL and English Java Fundamentals both from Oracle.

Also during high school I made my first Android application. In 2014, at the age of 18, I launched for Dextro Energy Romania an application that contained training programs for bodybuilding and cycling with instructions for using Dextro Energy products and a catalog application for Windows.

In 2015, I started training as a system administrator, following two advanced training courses within the Class IT company. In the same year he graduated from Nicolaie Iorga Theoretical High School in Bucharest, I’ve obtained the certificate of competences, and I was admitted to the Faculty of Informatics of Titu Maiorescu University in Bucharest.

Based on the knowledge gained from the age of 12, we created the SenDesign brand. For a very short time I worked as a Quality Controller at Ubisoft for the Watch Dogs 2 project. Between 2015 and 2018 he collaborated on the photo editing part with the Tiny Smiles studio, processing over 6000 Christmas pictures with babies and families. them.

In 2017, SenDesign took international roots by opening a branch in Perth, Australia being involved in both software development and web design. Also in 2017 I enter the United States market where I deliver mobile applications, Windows applications and websites. Here we built the digital infrastructure for an amusement park inside a mall. Project that I took without having any idea how to do it.

Within Titu Maiorescu University I took part in numerous development projects, some international. In 2016, I give birth to the Universitas module, the first application in Romania for communication between student and professor in the university educational environment. In 2020, after a development period of 4 years, I launch the utm.ro website of Titu Maiorescu University. At the end of 2020, within TMU I start to implement the technology behind the Universitas module.

I graduated from the Faculty of Informatics of Titu Maiorescu University of Bucharest in 2018. I make my debut as a writer by publishing numerous guides on the SenDesign blog. At the end of the year, I launch for free the educational application DRPCIV Car Questionnaires on the Android platform with a success of over 15,000 downloads just 10 months after its launch.

On October 1, 2019, I was invited as an honorary graduate of the Faculty of Informatics at Titu Maiorescu University in Bucharest, at the opening of the new academic year. Also during this period I assemble and rewrite the guides published on the SenDesign blog, in a single volume entitled The Online Business Guide. The 1st and 2nd editions were launched in 2020.

In April 2021, the debut book is translated into English for the international public under the title The Online Business Guide. In November of the same year I launched the book Successful Web Design. Keeping pace with the launches, in April 2022 I launch the book WordPress Design. Book in which I detail step by step, through clear instructions and images, the creation of a website in the WordPress platform.

I am currently working for SenDesign as a Software Developer and Creative Director. I write marketing materials and digitally developed on the SenDesign blog, on the SenDesign Community on Facebook and in other titles to be published. 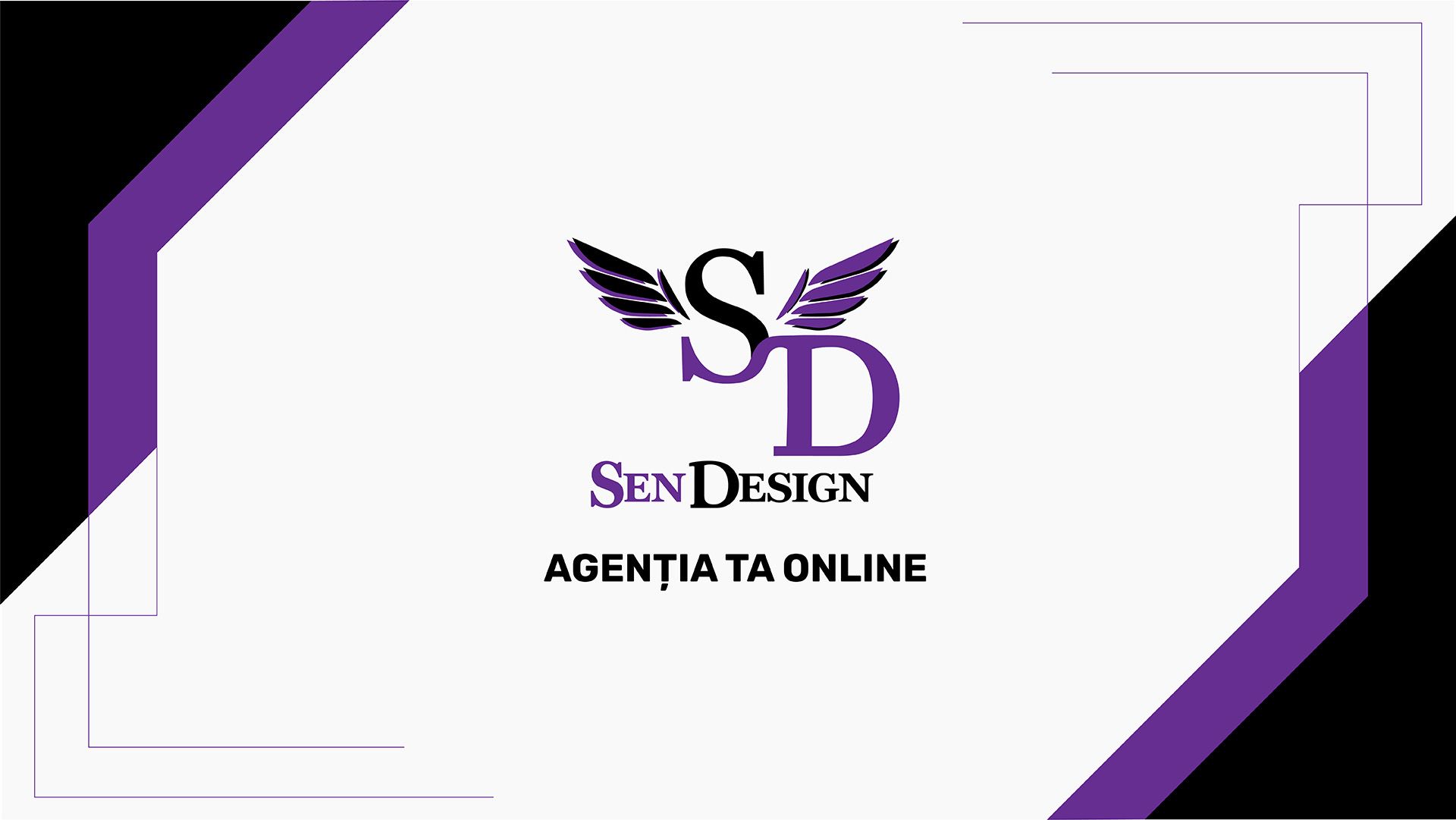